Home Entertainment News “Leave my mother and kids out of this!” – Mercy Aigbe rages...

Ace thespian, Mercy Aigbe has lost her cool following fresh allegations on how her mother snatched another woman’s husband with the aid of charms. 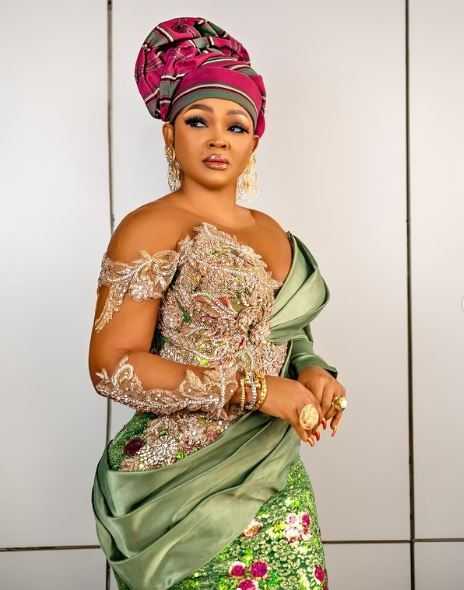 The allegations were shared by the controversial IG blogger, Gistlovers while revealing its chat with some individuals who claim to have known Mercy Aigbe’s mother’s dealings.

According to the chats, Mercy Aigbe’s mom was widely known in the Anthony area of Lagos State, where she snatched a woman’s husband, alongside other allegations of promiscuity incorporated in the chats.

Reacting to this, the actress has sternly warned the anonymous blogger to leave her mother and children out of this saga. She slammed Gistlovers for publishing a demeaning report coined by a hater without proper investigation, all in a bid to bring her down.

“Dear Gistlover, I don’t know if you were paid, to try to bring me down, sincerely, I am not moved neither am I bothered with all the name calling, bashing and everything…. in a situation where people don’t know the truth, don’t know the true picture of situations and they decide to be used as an instrument of destruction then it is left to them and their conscience, you and your cohorts have come up with different narratives just to paint me as a DEMON, you even involved my kids, now you are involving my dear Mother! Someone comes to your DM cooks up a story just to bring another person down, you without confirming it decide to publish such LIES! I know you think cos you are faceless you are untouchable, but I laugh! Cos no one is untouchable not even you! Gistlover bash me all you can! Label me whatever name you want to.! But leave my Mother out of this! Leave my kids out if this! Since I was the one you were paid to face! Focus on me! And me ONLY…… this post distasteful and you should be ashamed of yourself! SHAME ON YOU GISTLOVER! SHAME!” 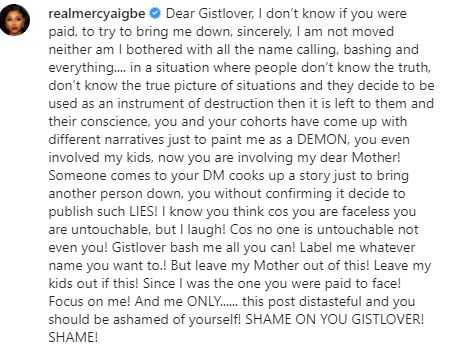