A Twitter user has narrated how a lady turned down a N190k job offer in Lagos because she’s scared of the Third Mainland Bridge.

According to @lollypeezle who narrated the story, the lady applied with hope of getting a role in the Mainland office of the company but was disappointed as only the island office is functioning at the moment owing to COVID-19 pandemic.

Writing further, he noted that the lady turned down the job offer on grounds that she has phobia for the ”plenty water and the Third Mainland Bridge.”

190k job that people will die for with all the paparazzi attached. I wish I could switch position.

Apparently, the company is a reputable real estate company with offices on the mainland and island. She thought she would be given the role in the Mainland office but presently, due to covid-19, the company is only functioning at the island office….

Madam said she can’t take the job. She’s scared of plenty water and Third Mainland Bridge. A staff even offered to be bringing her from Alapere where she stays, she didn’t accept. She said she has heard a lot about the bridge… a lot bii ti bawo? She no need job. 3mb phobia” 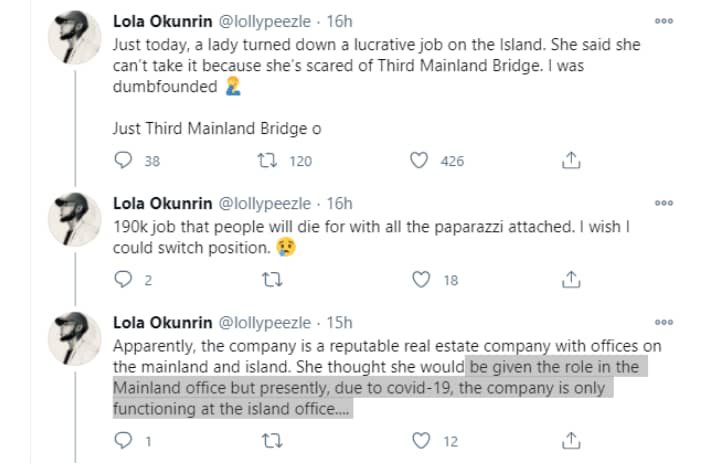