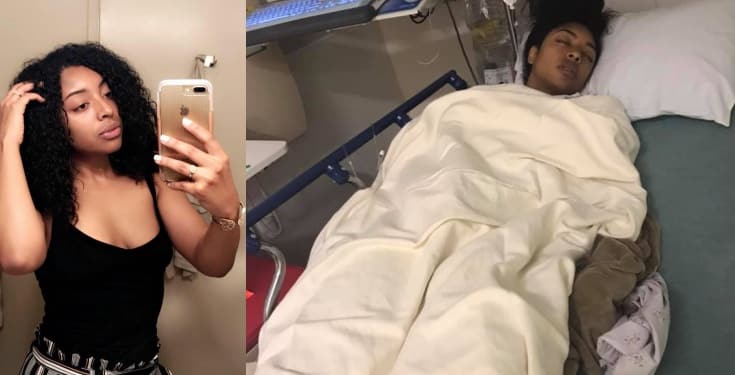 An American based lady identified as Joy Finley, took to social media to recount how excessive use of birth control almost claimed her life.

According to the young lady, she began bleeding and a check up by the doctors revealed that the birth control pills she was using affected her uterus.

My Birth control almost killed me literally. So boom story time…. since March 3 I was on my period and didn’t stop bleeding until April 6th, that never happened to me so I made a doctors appointment to figure out why I was bleeding so heavy. Turns out my IUD moved out of my uterus. So yesterday Monday the 8th I got my IUD taken out and they replaced it with a new one. But my body rejected the first one, so my smart self should have thought more before trying to put another one in there. So like 25 min go by I get home and I started vomiting viciously I was having hot flashes, passing out.

I went back to the emergency room Monday night around 7pm and they said the new IUD was being pushed out my uterus what the hell i had to stay in the hospital to make sure my uterus was not infected I was in excruciating pain and this post is not for sympathy it is honestly to educate all my ladies out there all these hormones are unnatural and could be fatal. I literally almost lost my life just because I didn’t wanna end up pregnant. Now I’m moving forward and going #birthcontrolfree I refuse to be a victim. Now I’m going to play it safe and take better care of my body nothing unnatural is going in me ever again. Ladies please educate yourself about the birth control you are using I don’t want you to go through this !! #iud #iudremoval …