A lady identified as IniObong has taken to Twitter to cry out after her friend was abused by three drunk men.

Sharing her story, she revealed how her friend got drunk and made them seek refuge in the hands of a friend who unknowingly had a negative plan for them.

“I invited my friend out yesterday evening, I told her she could sleep at my aunts place and by the time I called my aunt she said she already had a visitor in her house. This girl lives in bwari. She said she had a friend and we can crash at his place.

He came to pick us up,my friend was very drunk. We got to the house and he said we could shower. We did and he gave us what to wear asked us what we wanted to eat. He made indomie for us. I bathed my friend and wore her clothes while I was bathing he took her to the other room.

When I finished bathing and got to the other room, I saw someone else there (Simeon’s roommate-roommate 1). He was already talking to my friend. Not quite long another man walked in again, another roommate.

Simeon came with the indomie and immediately This Simeon’s roommate Says I should leave the room for my friend to eat, I was very confused I asked why and they’d said Simeon also wants to eat indomie from my plate and he wants to eat in the other room.

Immediately I was done eating, I went to see my friend.this guy had already locked the room Door. I told him to open up and I asked my friend if she wanted to sleep with me and he kept telling me she’s safe.

And I told him that I can’t leave her alone i Don’t know you guys and this guy was pulling my hands telling me to leave the room. I was there telling him I wanted to stay with my friend but he kept pulling me out of the room and my friend was too drunk to even say a word but she was holding me and I told this guy this was a clear Indication that she did not want me to leave but he kept pulling my hand and telling me to leave.

when I left, I asked Simeon why he’s letting My friend stay with his friend, I mean, you’re the one she knows and he told me that my question was tricky and my friend is safe I shouldn’t worry. I stayed up till after two and I eventually fell asleep I kept my phone beside me Incase of any calls, removed my phone from sleep and all.

I subconsciously woke up around 4/5 and I didn’t see my phone beside me and conveniently Simeon was awake and I asked him where my phone was and he gave it to me. I slept again. I woke up to my Phone vibrating by 7.

A call came in and I opened my phone to see 10 missed calls from my friend that came in around 5 ish when my phone wasn’t close to me and i quickly stood up to go and check on my friend just to see two guys in the room.

I asked where my friend was and one Said she was in the parlor, I went there to see my friend in a towel. Idk but I just feel like I should drop this for all of you saying I set up my friend or I let my friend down.

It was me, a drunk girl VERSUS 3 men! We’ve gone to the police,made a report.Hopefully, they’ll be brought to book.” 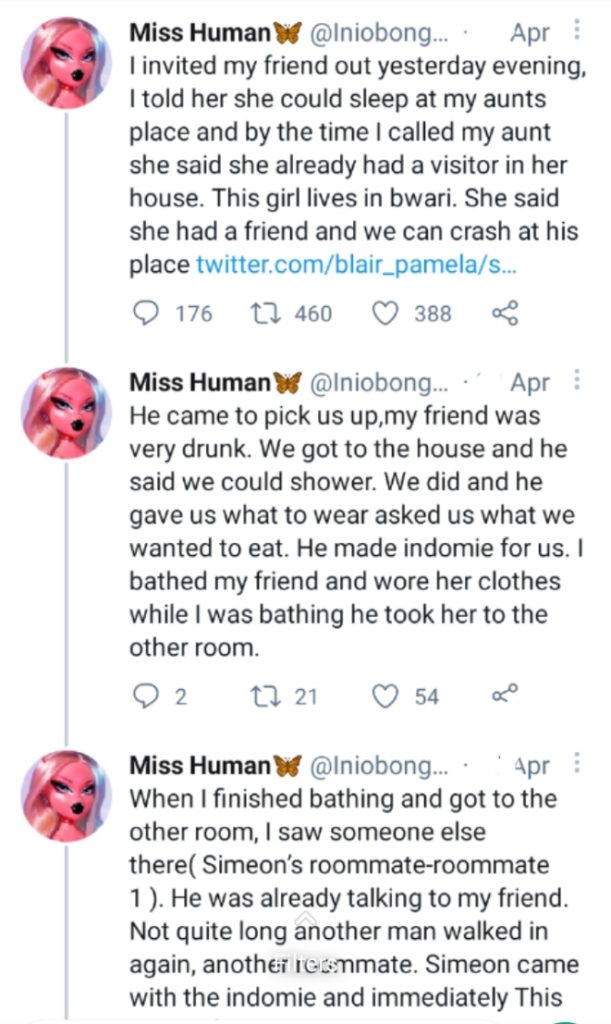