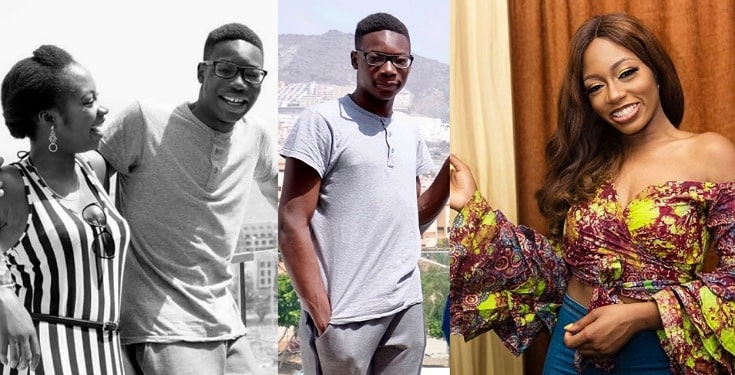 Alexander Kareem, 20, was gunned down close to his family home in Shepherd’s Bush, West London.

His older sister Khafi Kareem, 29, was in mourning last night with relatives following the fatal shooting of popular Alexander.

The cop was a poster girl for the Met and appeared in publicity photos alongside Met Commissioner Cressida Dick to promote female recruitment.

However, she sparked controversy by appearing on Big Brother Nigeria last summer after bosses turned down her request to appear on the show beforehand.

She has 1.2 million followers on her Instagram account, where she has posted photos of herself with Love Island’s Mike Boateng, also a cop.

PC Kareem is currently on restricted duties while the Met’s Directorate of Professional Standards investigates her unauthorised appearance on the TV show.

But she was left devastated after learning how her brother Alexander Kareem was shot dead while walking home from a convenience store in the early hours of Monday morning.

The student screamed out “help me” as he lay dying in the street at 12.40am.

Passers-by tried to give him CPR before paramedics reached the scene – but Alexander was pronounced dead a short time after.

A friend told The Sun: “His family is distraught. Alex wouldn’t talk down to anyone – he was friends with everybody.

“They are all good people. His sister Khafi spreads positivity through her YouTube account. She wakes up and prays for people at 7.30 every morning.

“Alex’s brother is trying to get back from Australia to grieve with the rest of his family, his mum is completely devastated.”

The friend added: “After leaving school Alex was the same goofy guy – he was always happy – and always had a smile on his face.”

Dozens of colourful bouquets had been left near the scene of shooting yesterday along with a bottle of brandy and a crucifix.

Mourners left tributes, including one photo showing Alexander with classmates with a message reading “You will always be in our hearts”.

Other pictures were left surrounded by candles, showing the tragic victim as a youth dressed in a blue rugby kit.

One message read: “You’re my hero, so brave. The point of death is there is a heaven.”

Two lads stood by the tributes in silence and wept last night, before pouring water on the flowers.

Another of his pals, 20, who lives in the area, said: “None of our friends moved since school and we see each other around.

“You would see Alex at the pub. He wasn’t tied up in anything, he had no beef and was a sound person.

“That’s why it has hit us hard. Nobody expected it to happen to him.

“People have made comments when they walk past here, they say he was involved in the wrong life.

“Sadly some people see a black boy in a tracksuit and assume he is a gang member, but they’re wrong.

“Alex was the fastest sprinter in primary school, where he went to Good Shepherd. He was always athletic.”

The victim’s sister PC Kareem has previously told how she joined the force after a 16-year-old pal was knifed to death near her family home.

She posted a photo of herself next to tragic Alex in March after he turned 20.

PC Kareem wrote on Instagram: “I thank God for your life and do not take you for granted!! I love you very much and I’m so proud of everything you are doing for yourself.

“You are a go getter and I pray God blesses every step forward you are making.”

Alexander died from gunshot wounds to his chest and abdomen, a post-mortem concluded.

Police are appealing for information about a white Range Rover driven by his killers which was found burned out three miles away in Ealing.

Det Chief Inspector Wayne Jolley said: “We are determined to bring those responsible for this unnecessary and terrifying violence to justice.

“We continue to appeal for witnesses who may have seen or heard what happened to come forward.

“The white Range Rover seen in the area and later found burned out is also a key part of the investigation.”

Lady who lost her boyfriend during EndSARS narrates how his ghost visited her, gave her his password