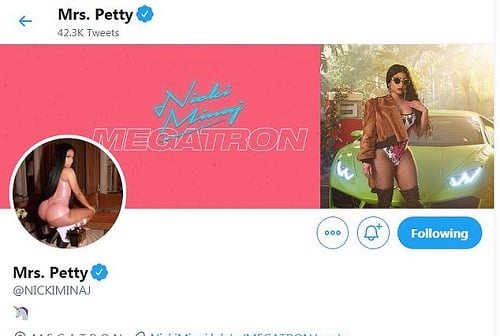 The rapper, 36, changed her Twitter bio to Mrs Petty on Friday, two weeks after obtaining a marriage licence at Beverly Hills courthouse.

It comes just days after Nicki revealed she was planning to marry ex-con Kenneth in just 80 days time, as she divulged details about her wedding on Queen Radio.

Nicki’s new surname first appeared on her Twitter page just days after she revealed more details about her upcoming wedding.

The “Barbie Dreams” rapper, 36, explained that she and Petty “filed for the marriage license and we still had to pick it up and I was traveling, by the time I came back, we had to renew it again.”

“From that time, you have 90 days to get married. That was about a week ago, so now I have about 80 days,” Minaj shared.