A Nigerian lady has got herself trending on Twitter after she listed out some habits that are forbidden in Islam on the platform.

The lady identified as @XahrerhIB on Twitter advised fellow ladies to desist from fixing nails, eyelashes, attachments and others because it is forbidden in Islam.

May Allah guide us to the right part.”, she tweeted. 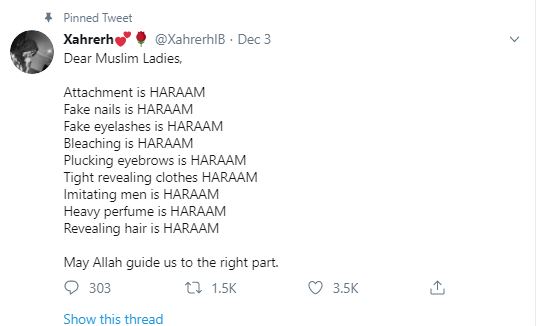 Drop the verse(e) that say(s) all the aforementioned are haram too. I hope you know dt calling what is not haram an haram is also haram. Don't use Hadith to bamboozle us. Also know d difference between Hadith and Quran. Wallao Alam

Displaying pictures is Haram, I think make up too sis.

you shouldn’t have to bother yourself, because as you know, this life is full of fake friends,poors,shoes,rich,clothes and everything u can’t imagine. And wallahi that why many people are distress and sad, because it is all this that peoplecherished most. Allah guidance. Amin

The fake eyewear on your Avi too is HARAM, always practice what u preach

Woman cam wear anything that beautify them in as much as it doesn't reveal there body and prevent them from being able to practice islam. If you're not praying, then i suppose you can wear it. Allah knows best

Pictures are haram, walk the talk Sis "Abdullaah ibn Mas'ood reported that the Prophet (SA2) said: "Those who will be most severely punished by Allaah on the Day of Resurrection will be the image-makers." (Reported by al-Bukhaari, see al-Fath, 10/382)"