Former Big Brother Naija reality TV star, TBoss has come out to debunk the insinuation that she has had an intimate affair with Ubi Franklin.

According to her, they have never gotten intimate to the point where they had to share a kiss.

“Let me just swear to you guys today, me and Ubi we have had nothing intimate when I say…we have haven’t as much as kiss…never…no,” she said.

She went on to share a series of post where she revealed the reason behind her video. 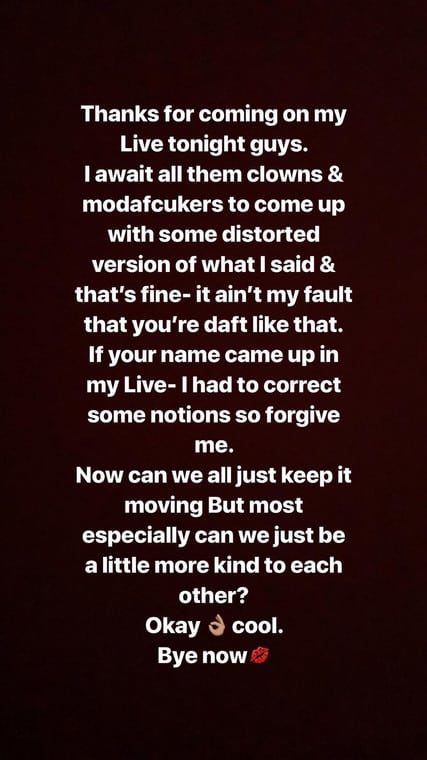 According to her, she decided to make the video to clear the air over the notion that she was romantically linked to the music mogul, Ubi Franklin. Times without number, there have been speculations that TBoss was in a romantic relationship with Ubi Franklin.

TBoss also addressed her alleged hate for Cee-C, stated that they are not friends and she thinks she has not given her any reason to hate her. She further stated that what Cee-C might consider as success is quite different from what she sees as success because they are in different places. According to the reality show star, the alleged hate is being fueled by people who think she is jealous of Cee-C’s endorsements.

She cheated, abandoned our kids – Ned Nwoko breaks silence on his divorce with Laila Charani

“If you don’t like me, breath ‘him’ breath out and accept your fate” – Bobrisky

Ka3na Cries Out After Contracting Covid-19 Alongside Daughter, Husband