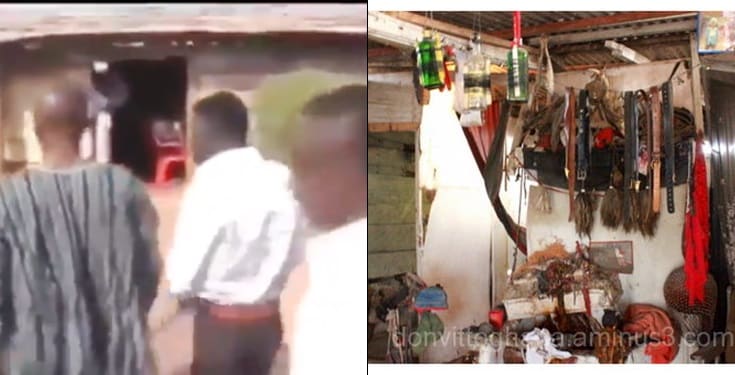 A popular herbalist in Ghana Kwaku Bonsam has reportedly stormed a church in the West African country to retrieve his Juju from a pastor.

In the video, the herbalist and his crew could be seen disrupting activities in the church while telling the pastor to return the Juju he collected from him.

Kwaku Bonsam was heard saying “I told you to be patient” but it was not certain if he was speaking directly with the pastor, who was totally confounded by the unexpected move of the herbalist.

In case you don’t know who Kwaku Bonsam is, in the year 2014 he was at war with Nigeria and Africa’s most popular seer, Prophet T.B Joshua, where he vowed to expose the Nigerian cleric and chase him out of Ghana.

Recently he stated in an interview that he has pastor-clients across the African continent – About 1700 of them – and they approach him for different charms to boost membership in their churches, Pulse NG reports.

“Over 1, 700 pastors and so called men of God from different parts of Africa have approached me, seeking powers to perform miracles, including Prophet T.B Joshua from Nigeria. He is my boy. I challenge him to come out and deny this.

Apart from the pastors, many prominent business people and celebrated church founders in Africa frequent my shrine for my services and if they deny, I am going to name them.”

Bonsam, who operates from a shrine at Sa-Peiman, a village on the outskirts of Nsawam in east Ghana, said his god is called Kofi-Kofi and provides him with supernatural powers that are desperately needed by pastors from all walks of life.