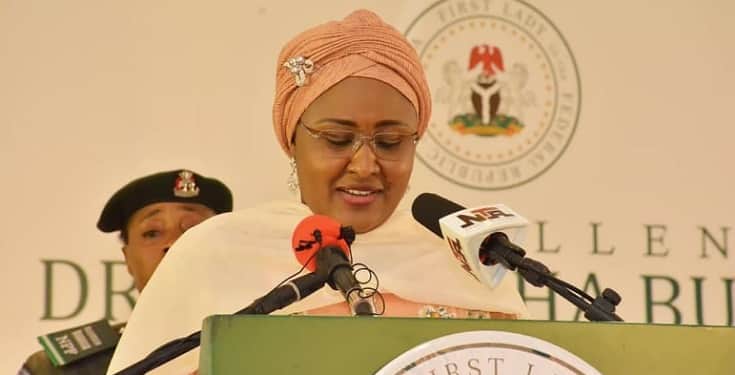 Aisha Buhari, has reportedly been out of the country for over two months now and according to Daily Trust, her absence is in protest of the recent developments in the presidency.

A report by the newspaper claims that multiple sources at the presidential villa said the first lady, who left the country in early August to Saudi Arabia to perform hajj (Muslim pilgrimage), has not returned.

Muslims who participated in the hajj exercise have since returned home, but according to Daily Trust credible sources at the Villa said the president’s wife has since left Saudi Arabia for London.
Read the rest of the report below.

“Mama (first lady) is in London. It was from Saudi Arabia that she went to London” one source said.
Asked when she is likely to return, the source said, “I don’t know. All I know is that she is in London” he said

Her absence became obvious after she did not appear alongside her husband at some recent official functions. She was conspicuously absent during the Eid-El-Kabir celebration in Daura, Katsina State when many were with their families.

The president hosted many dignitaries including Guinean president, Alpha Conde, during the Sallah celebrations.
At public events, Dr. Hajo Sani, Mrs Buhari’s Senior Special Assistant on Administration, has been representing her at different functions.

For instance, on September 25th, Dr Hajo represented Mrs Buhari at an event of the Organization of African First Ladies for Development (OAFLAD), on the sidelines of the 74th United Nations General Assembly (UNGA), New York. Hajo.

According to a statement from the Director of Information to Aisha Buhari, the event was attended by first ladies of Zimbabwe, Sierra Leone, Uganda and Niger Republic.

Attempts to reach Mrs Buhari’s media aide, Suleiman Haruna, to inquire why she has been absent has proved abortive.

A text message sent to him reads: “In months, her excellency has been out of public glare, locally and abroad. She’s being represented by aides. Where is she?” was sent to him twice but no response was received from him.

The same text message was also sent to presidential spokesperson, Garba Shehu, yesterday. He replied that her spokesperson should be contacted.

Mrs Buhari drew worldwide attention when she criticised her husband in an October 2016 interview with the BBC. Mrs Buhari in the interview said she feared that her husband’s administration was deviating from its mandate to the people who voted him into office in 2015.

She also expressed doubt that she would support him if he sought re-election unless he implemented immediate changes in personnel and policies.

Mrs Buhari last year also made headline news when she alleged that two men in the ”cabal” were holding her husband’s government ransom.