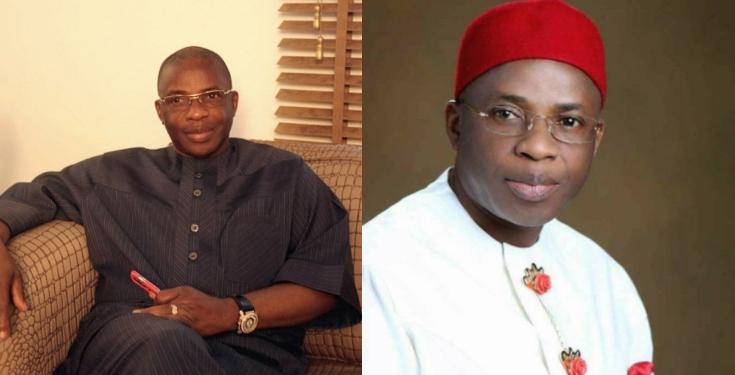 Former governor of Imo State, Ikedi Ohakim, is reportedly at loggerheads with a lady who he allegedly had a romantic relationship with and is now reportedly threatening his life. 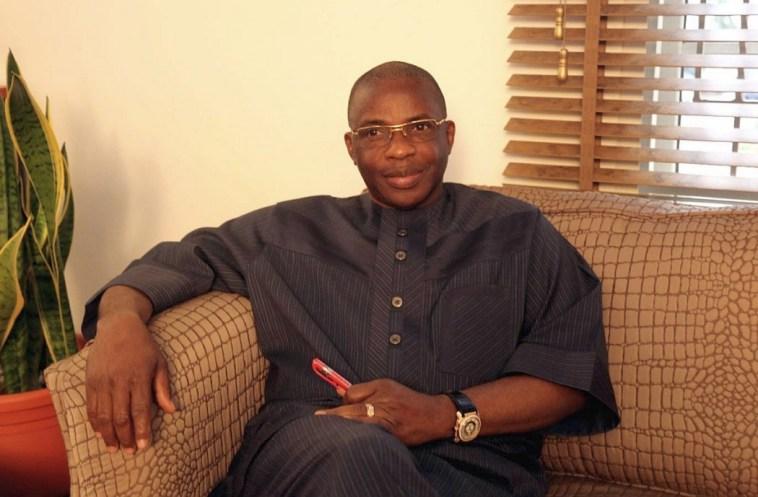 According to a report by PremiumTimes, Ohakim who was in office from 2007 to 2011, was allegedly in a relationship with one Chinyere Amuchienwa who lives in Lagos and deals in luxury items.

Their alleged relationship turned sour and the governor is allegedly claiming Ms Amuchienwa is threatening to blackmail him and has involved the police. The lady in question alleged that the former governor gave her a fake diamond ring as an engagement ring.

Ohakim, 63, has been married to his wife, Chioma, for 39 years and they have five children and many grandchildren.

Read the report below…

A former governor of Imo State, Ikedi Ohakim, is involved in a dirty fight with a Nigerian woman he had a romantic relationship with, and at some point told the police the woman assaulted him inside a hotel room in Abuja.

The woman, whose name is Chinyere Amuchienwa, is from Imo State. She lives in Lagos where she deals in luxury items.

He has been married for 39 years to Chioma Ohakim, a lawyer. They have five children and grandchildren.

In a petition dated January 20, which he sent to the Inspector-General of Police, Mohammed Adamu, Mr Ohakim said, “On Saturday, January 18, 2020, Miss Chinyere physically assaulted me. She deceived me and lured me with a meeting request. I subsequently invited her to my hotel room at BON Hotel, Asokoro and she arrived at about 20:15 p.m.

“Directly I opened the door quite innocently, pandemonium took over, she bounced on me grabbing me by my shirt with all her strength and gave me a violent push.”

Mr Ohakim continued, “As I staggered to recover, she rushed for my phone on the table and a struggle ensured (sic). Directly I retrieved the phones from her she immediately rushed to grab something from her bag which I strongly suspected to be a gun.”

Mr Ohakim said he ran outside his room, shouting for help.

The incident, he said to the police, could be confirmed from the hotel’s CCTV.

He said he “immediately” filed a complaint at a police station in Asokoro against his estranged mistress.

The former governor told the police that Ms Amuchienwa is a 56-year-old divorcee.

He said Ms Amuchienwa has been his friend whom he “lavishly extended a lot of favour to” and that she was even involved in his failed 2019 governorship election campaign, but that the relationship went sour and since then she has been threatening to “blackmail” and “destroy” him.

He said he was “completely terrified” and wanted the police chief, Mr Adamu, to intervene in the case.

He promised in his petition to provide specific evidence to the police to back up his allegations against Ms Amuchienwa.

Mr Ohakim described himself to the police as one who holds the traditional titles of “Ogbujingidi of Igbo land and the Otumba Tomitope of Yoruba land”, including “other 51 chieftaincy titles across Nigeria,” besides being a former governor of Imo state, a businessman and a “defence and security contractor.”

The police responded to Mr Ohakim’s petition and asked him to report at the force CID for an interview on June 1. They requested him to bring along specific evidence he said he had, including any other useful information that could help in the police investigation.

The police letter was signed by Abdulkadir Jimoh, a commissioner of police.

The former governor and his estranged mistress reported at the force headquarters and were both interviewed by the assistant inspector-general of police in-charge of the Force Intelligence Bureau.

Ms Amuchienwa told PREMIUM TIMES, Saturday, that Mr Ohakim did not tender any supporting evidence or call any witness during the police interview, an assertion this newspaper could not verify.

Mr Ohakim’s phone number returned “cannot receive call at the moment” when this newspaper tried repeatedly to reach the former governor over the weekend.

A text message sent to his phone line was also not delivered at the time of filing this report.

PREMIUM TIMES, Saturday, contacted Emmanuel Ohakim, a brother to the former governor, but the call was switched off immediately our reporter finished introducing himself. He did not call back or pick subsequent calls from the reporter.

Ms Amuchienwa, on her part, tendered some documents to the police to counter Mr Ohakim’s claims.

Mr Ohakim, through his lawyers, J. N. Egwuonwu & Co., wrote to the inspector-general of police on July 20 requesting copies of the documents tendered by Ms Amuchienwa, including her account statement with Access Bank, which the lawyers said she claimed she used to transfer some money to Mr Ohakim.

Patrick Agu, a lawyer in the chambers, promised to get back to PREMIUM TIMES on the status of the case and to also let the paper know if the documents tendered by Ms Amuchienwa were released to them. But he did not call back. He did not also pick subsequent calls from the reporter.

Ms Amuchienwa, in her response to PREMIUM TIMES’ questions, admitted she was in a relationship with the former governor.

“I am an adult and I am entitled to date anybody I choose to,” she said.

Ms Amuchienwa, however, said the quarrel between her and Mr Ohakim was about some money she said the former governor took from her and was yet to pay back.

She also said Mr Ohakim visited her shop in Lagos and carted away designer’s suitcase, bags, shoes, and other luxury goods, which he has allegedly refused to pay for.

Mr Ohakim, in his petition, addressed this claim by Ms Amuchienwa. He said he got the items as gifts from her.

“Two or three times she travelled out, she bought some gift items for me purely unsolicited and in reciprocal to mine. Items such as coffee, perfume, bag and shirt,” he said.

Those were not gifts, but things Mr Ohakim picked on credit, Ms Amuchienwa said.

Ms Amuchienwa, during her interview with PREMIUM TIMES, called Mr Ohakim a “scammer”.

Ms Amuchienwa sent the voice note to PREMIUM TIMES via WhatsApp, but this newspaper has not been able to verify if the voice is that of Mr Ohakim.

On the incident at BON Hotel, Abuja, Ms Amuchienwa disputed the claims by Mr Ohakim.

She said she was invited to the hotel by the former governor and that she accepted the invitation because she thought it was about the money he was allegedly owing her.

“I was invited to the hotel, the appointment was made (since) last year when I said I would not see him anymore…. And it’s still based on the money Ohakim is owing me. We don’t have any reason to meet anymore, we don’t even have any communication anymore.”

Ms Amuchienwa said Mr Ohakim snatched her phone, ran out of the hotel room with it when she declined to sit down with him.

All the items in her handbag, she said, were poured out at the reception and no gun was found as alleged by Mr Ohakim.

Both Mr Ohakim and Ms Amuchienwa were subsequently interviewed at the Asokoro police station over the incident.

Ms Amuchienwa said she declined a ride from the former governor when both of them were done and were about leaving the station.

Mr Ohakim in his petition to the police chief, Mr Adamu, said Ms Amuchienwa, accompanied by people he suspected to be hired thugs, used a vehicle to barricade the entrance to his residence in Abuja in May last year.

She said she went only with a driver to Mr Ohakim’s residence, met with his orderly and peacefully asked if he (Ohakim) had left her money with him.

Ms Amuchienwa also responded to Mr Ohakim’s allegation that she could not account for over N100 million she received from him for the prosecution of the 2019 governorship election campaign in Ideato North Local Government Area, Imo state, where she was the co-ordinator.

She said the former governor could not provide any evidence or witness to substantiate the allegation when the police at the force headquarters requested him to do so.

“They asked him (Ohakim), ‘you said you gave her N100 million, how did you give it to her?’ He said he was the one who carried it (in cash) to her. Nobody was there? No signature?” Ms Amuchienwa told PREMIUM TIMES.

“I have never asked him for N700 million (as he is claiming in his petition),” she said. “I don’t blackmail. All I want is for Ikedi Ohakim to give me back my money.”

She, however, declined to mention the total money Mr Ohakim was owing her.

“Ikedi (Ohakim) brought land document and showed to me, he said the land belonged to him. The land is on the airport road in Lagos, he even took us there. He said he was waiting for payment from the buyer of the land and that when they pay him he would be able to pay (me my money).

“It was when this trouble started that we discovered the land didn’t belong to Ikedi Ohakim. It is this land he has been using to scam me.

“The witnesses who are aware that I gave him money have volunteered their statement to the police,” Ms Amuchienwa said.

PREMIUM TIMES asked Ms Amuchienwa if she did not consider that Mr Ohakim’s wife could have been at home when she went to meet Mr Ohakim’s orderly.

“Is he married? Why do you people want me to get into that point? Is Ikedi Ohakim married?” she responded.

The former governor, in his petition to the police, confirmed he bought a “very expensive diamond ring” for Ms Amuchienwa. He, however, said the ring was just a gift to her and that he bought it in response to a request from her.