Ehi Ogbebor fired back at her critics after being told that she ‘married twice and failed twice’ over an Instagram post she shared.

This comes after the hotelier posted that househelps are one of the reasons people are not usually nice as they end up being ungrateful.

A follower with the handle @Johnandrews1bb who commented on her post, pointed out that just like there are good people and bad people, there are also wonderful househelps and bad ones.

He added that Ehi Ogbebor married twice and failed twice because she talks too much and lack humility.

He wrote “You are wrong. Just like there are good people and bad people there are also wonderful house helps and bad ones. You talks too much and lacks humility. This is why you married twice and failed twice” 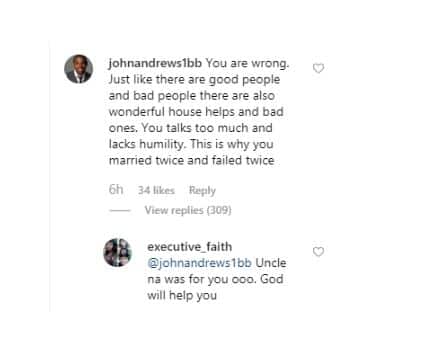 Reacting to the claim made, the mother of three lashed out at those quick to put the blame on the woman while ignoring the man who may not be a good partner.

Admitting that her marriage failed twice, Ehi Ogbebor further affirmed that she didn’t fail because marital crisis is always bound to happen.

She also wondered why the woman is not cut some slack even when she struggles for upkeep of her children after the marriage ends.

Watch her video below;