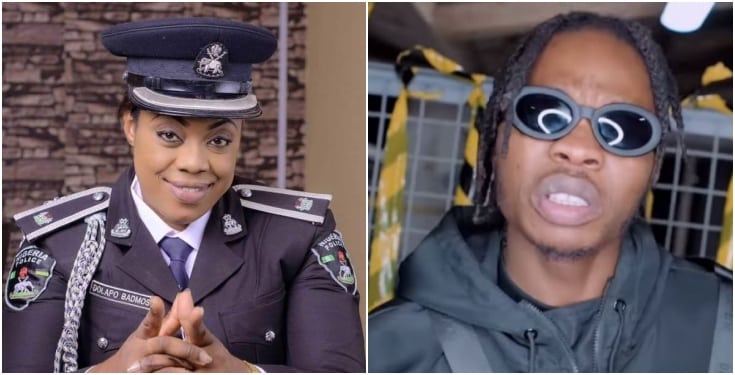 The Zone 2 Police Public Relations Officer, PPRO, Onikan, Lagos, Chief Superintendent of Police, Dolapo Badmus has thrown a shade at Naira Marley as news circulates that the singer has been arrested by EFCC on his birthday.

Badmus, who shows a strong stance against internet fraudsters aka Yahoo boys, took to her Instagram page to mock the Yahoo boys advocate.

The only authentic NAIRA I know is Nigeria’s legal tender. Any other naira attached to something is a counterfeit!

According to reports, Naira Marley is currently being questioned at the EFFC office in Ikoyi, Lagos.

His arrest might be in connection with his statements on social media which glorifies internet fraudsters aka Yahoo boys.

Naira Marley has been making headlines after he shared a post on his Instagram page suggesting that he had a soft spot for people involved in Internet fraud, saying Yahoo is not a crime, it is a payback for enslaving blacks centuries ago.

During a recent Instagram live session, he urged Nigerians to pray for internet fraudsters (Yahoo boys) saying they are the reason money circulates to the common man.

The video has since stirred reactions from Nigerians who described Marley as a disgrace and bad example to young Nigerians.

However, a few Nigerians supported Marley, stating that Yahoo boys were the reason some Nigerians can eat and survive.

The singer is popular for his 2017 hit song titled ’Issa goal.’