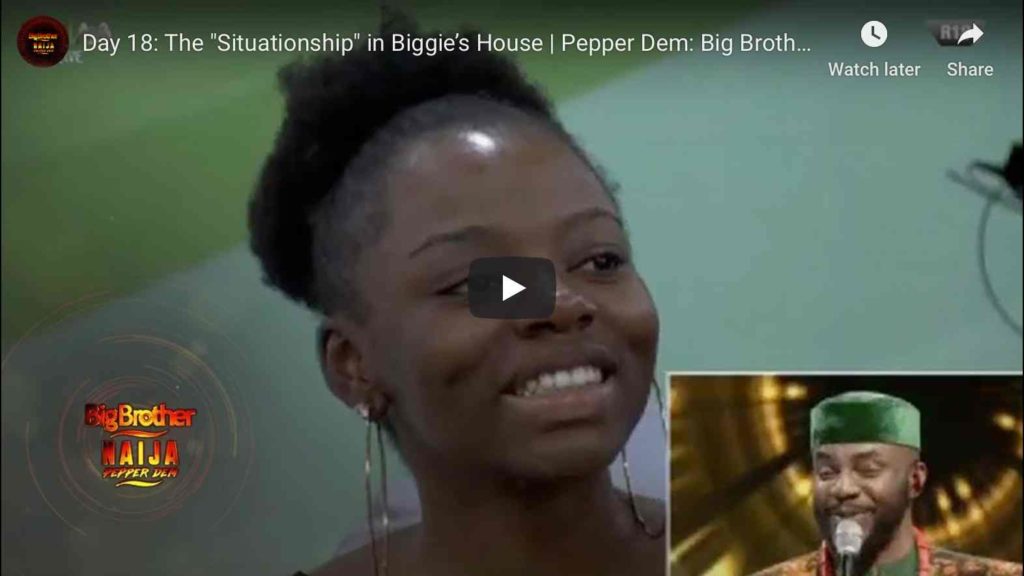 Let’s throw it back to when Ebuka addressed the elephant in the room – the love triangle (more like a hexagon) between Diane, Tuoyo, Sir Dee, Nelson, Esther and Frodd. While we take note of sailing ships, it’s time to analyze the ships that appear to be facing stormy weather, shall we?

The Pepper Dem gang started the Season with one thing in mind – to have fun! This has been evident in their relationship(s) with certain men in the House; but what happens when the ship successfully sails into the friend zone? How about we ask these pairs – Diane, Tuoyo and Sir Dee; Esther and Frodd?

Remember when Sir Dee put Diane in the friend zone when he told her that he’s in a relationship outside the House? Now we see why she was quick to tell Ebuka that Sir Dee walked into this zone.  What of the awkward moment when Esther made Frodd cry because she rejected his affection? In her words, “let’s just remain friends”.

We all fear to take a seat in the friend zone; but hey, this zone has led to great friendship goals in Biggie’s House. So maybe it’s not the end of the world after all.

Cruising into The Love Zone

From their early days of friendship, Nelson and Diane could have easily fooled us with the romantic spark between them. Yet, following her conversation with Sir Dee during the Diary Task and her teasing dance moves with Tuoyo at the Saturday Night parties, Diane kept Africa (and Nelson) guessing who her heart belongs to.

Nonetheless, Nelson and Esther have recently been found having intimate moments in the House – even after turning Frodd down (poor Frodd). Judging from how she rejected Frodd to her intimate moments with Nelson, we reckon that the iron lady might just love the idea of being wanted. Whatever her strategy is, seems to have Nelson hooked.

What now becomes of Diane? Clearly, the Diane and Nelson ship has successfully sailed into the friend zone. Where will the Diane ship sail now? Hmmm… Tuoyo still seems interested, or is he?

This complicated love hexagon prompted Diane’s heart-to-heart chat with who her heart really wants – Nelson. However, what we weren’t expecting was Nelson’s response to Diane’s shot-shooting. The irony in this is while Diane’s love was being rejected by Nelson, Frodd’s love also got rejected by Esther. What a week for friend-zoning!

Could the smugness that comes with being wanted or chased be the string that ties Esther and Nelson? What then happens when Esther admits her feelings to Nelson? Will the chasing stop like it did with Diane? Time will tell.

In case you missed it, here’s the gist – Diane likes Nelson – who likes Esther – who is being chased by Frodd. The question is, which ship do you think will sail in the love zone?