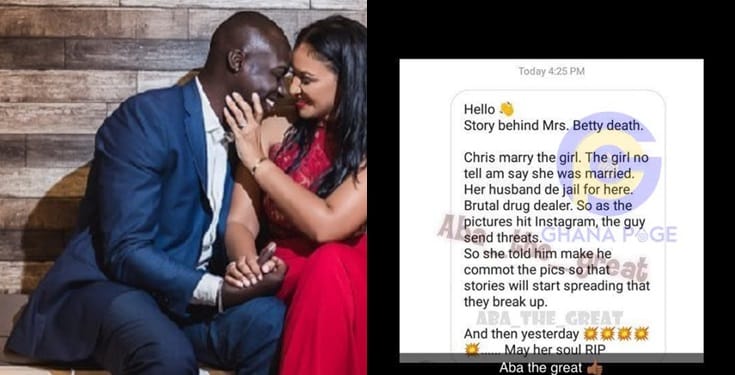 Bettie Jenifer, Chris Attoh’s wife has been shot dead in the USA and speculations on how and who killed her have already started circulating on social media and not all of them are pleasant.

According to an inside source, Bettie Jenifer was killed by a hired gunman of her ex-husband who is sitting in jail for drug offenses, Ghpage.com has gathered.

From what we have gathered, Bettie Jenifer was married to cartel boss who has been jailed and she never told Chris Attoh about him when they met.

But after they got married and threats started pouring in from the cartel members, Bettie Jenifer convinced Chris Attoh to deleted their photos from his Instagram page to send the message to her ex-husband that they have separated. From what Ghpage.com has been told, that is why Chris deleted her photos last week

Sadly, they couldn’t convince the drug organization that Chris Attoh has left their boss’ wife alone. Pissed by the unfaithfulness, an order for her to be taken out was given by the boss from jail.