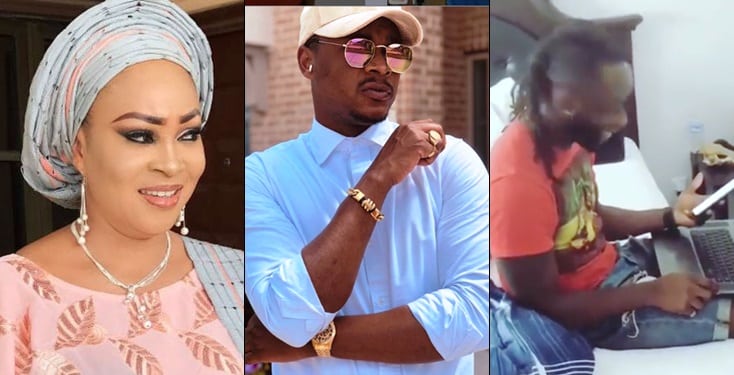 Bukky Wright and her son have waded into the trending catchphrase Am I a Yahoo boy, following the arrest of singer Naira Marley. She was heard saying to her son: We are not a Yahoo family.
The young man identified as Ojay with the Instagram handle @ojayywright had actually started with his friend operating a laptop in his room. He asked if he was a yahoo boy, while that one responded saying No.
He then proceeded to face his mum, Bukky Wright, who was already on her way out of the home.
While his friend laughed and advised him not to do yahoo, his mother’s reaction was a bit more hilarious.
Setting the camera on her, he asked if he is a yahoo boy. When she wouldn’t answer the question which she found ridiculous, he went on to ask if they were a yahoo family to which she replied:
“I am not a yahoo girl.”
He then asked if the family is a Yahoo family, which she finally responded we are not a yahoo family, after which the video was rounded up.

Lol you this boy you’re not serious! . . . Repost from @ojayywright using @RepostRegramApp – ??? I think my Family members are already tired of me o ? Simple question everybody is afraid to answer ??? . . Am I ??? And this Bukky Wright woman in her everyday life would still be acting for you ?‍♂️ #Goodmorning #meallday #Goofy #MoneyMustBow #MMB

Meanwhile, the Economic and Financial Crimes Commission (EFCC) has said music star Naira Marley cannot be released because of ‘overwhelming evidence’ against him.

“There is overwhelming evidence against Naira Marley; so we can’t afford to release him on administrative bail like Zlatan and the three others,” EFCC spokesman Tony Orilade said.

“Naira Marley is still in our custody and will be charged to court soon and we will make the charges known in an official statement soon.