#BBNaija Day 21 was epic. The housemates had the eviction fever. Watch Eric and Tochi as they say goodbye; catch up with the hair game, a rundown of week 3 and lots more…

Kaisha, Trikytee, Eric and Tochi were nominated for eviction

Kaisha, Trikytee, Eric and Tochi are nominated for Eviction as the bottom four. Ozo also opens up about his Head of House win and his birthday in Biggie’s House.

Tochi bid the Housemates goodbye and shared his surprise with being sent home so quickly. He also shared his plans for the future and thanked his fellow Housemates for his great experiences.

Tochi leads the beard gang amongst the gents and we’ve seen his commendable acting skills too. Here’s a look at some of his highs and lows in Biggie’s House.

Eric had a chance to share his thoughts on his time in Biggie’s House and how he is looking forward to seeing Lilo and getting his fitness and modeling careers back on line.

We’ve seen him do more push-ups than anybody else in Biggies House. Here’s a look at some of Eric’s highs and lows.

In the past week the Big Brother Housemates had a jam packed time which included great performances during the Dulux and Flutterwave Tasks. Ozo celebrated his birthday in grand style and also managed to get into his first verbal argument. Things also got heated between Vee and Wathoni over the bed issue and the ‘ships continued shipping along happily.

Who remembers day one of the Big Brother season five House? 20 young hopefuls coming into the House to make a name for themselves and to make new friends. It was pure excitement and unity as people came in and greeted each other, and immediately got to know each other.

It is day 21 now and as we have been watching we have come up with some ways that the Housemates have shown one can survive this House.

It is no secret, when you win Tasks you are in a league of your own. Remember when Praise won the very first Arena Games and became the first to benefit from being pampered in the House? Apart from winning the Tasks, you have to be a good teammate when you need to perform. Though this did not save Praise from being part of the bottom four, it was part of the reason he was in good standing with his Housemates, many of whom voted for him to stay. In comparison to the first Wager, this was a massive win for the Housemates because Praise re-instilled hope. To bring the memories closer to home, do you remember how the team celebrated when Cornish Dawn won their wager? Or when the whole House won the Patricia Challenge this week? Everyone is happier when wages are won!

2. Be an endearing Head of House

We have heard all week about how Ozo is a natural-born leader, how he and Dorathy have made great strides in the House and have kept all the drama down. Even when Ozo raised his voice against fellow Housemate Prince, he quickly apologized, keeping the peace with the rest of the House. During Diary sessions this week every single Housemate spoke highly of Ozo and his leadership abilities. His clear record has earned him the respect of the Housemates especially regarding his worth in the House. Dorathy was praised by all Housemates as being the best support that Ozo could have in the House. Dorathy has remained grounded and in some cases, according the Housemates, made difficult decisions that Ozo could not make in the moment. Needless to say, this has been a great partnership and therefore another way we think you survive the House. 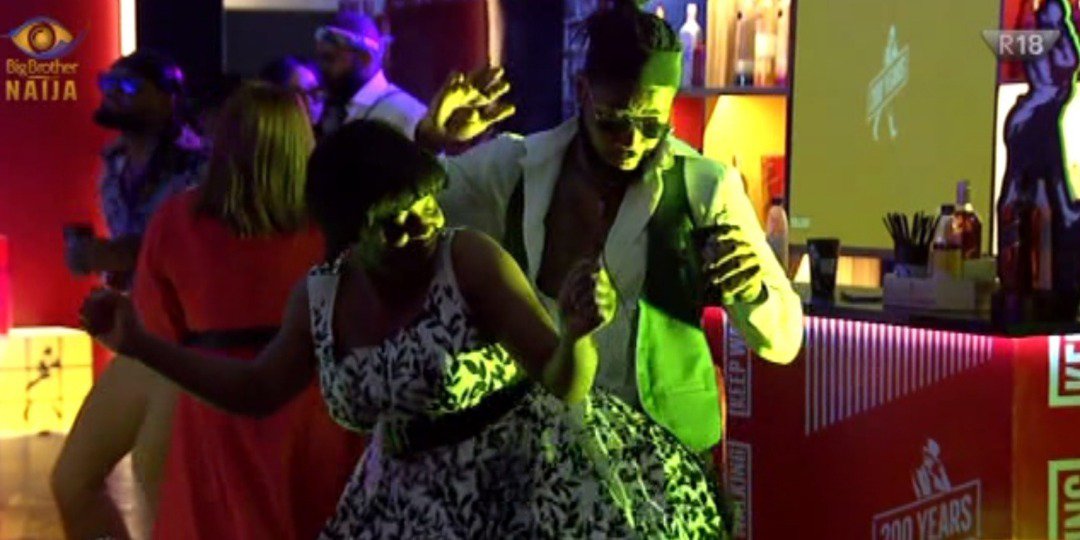 Let’s talk about the parties. Our housemates love to get dressed up, look good and have a good party to blow off some steam. Though we can sometimes see tension before and after the parties, we know that during the night, and just for one, the Housemates move their bodies and get into the moment, fully.

Last week we saw Brighto sleep through the morning workout and earn himself a fine. But besides the actual sleeping in, we saw the girls fight for a few days about a bed, which shows that sleep is a very important part of the House and its workings. Therefore, our fourth insight is not to oversleep that you miss the action, ut also watch where you sleep so you do not become part of the action. Abi?

This might be the most important one that we saw fights erupt and the Housemates calling each other to order over the stove or the dinner table. A lot has been said in the House about food, firstly, when there is little variety of food, the Housemates are not happy. In the Diary sessions this week, Housemates expressed their happiness that they will now have money to buy the food they have been wanting to buy. for the last two weeks. Money equals food, equals happiness. One of the other insights from watching Diary Sessions again is that some of the Housemates miss Ka3na because she cooked.

Day 21: Another day another Diary

Tonight will mark yet another change in the Big Brother House, but the Housemates remind us of their aspirations for tomorrow.

As always, we can count on Biggie to ask some questions that let us not only know what is happening in the House but to get to know the Housemates better. Of course, we will tell you how people were feeling, but today Biggies asked a question that got us some insights: What will you do when you leave the House?

But first, how are people feeling?

Biggie asked everyone how they felt about tonight’s Evictions. everyone was quite nervous, except for a confident Kiddwaya who said he was both calm and excited about the Evictions tonight. Most notably, he said that if he stayed, he was looking forward to after the Eviction session if he is lucky enough to stay. Praise was once again tensed and expressed that his goal coming in was to make friends and have a good time, and he has certainly now made bonds with everyone in the House so far and was happy about that. Trikytee was anxious because he has not achieved everything he wanted to achieve during his stay in the House. He said he wants to Win or at least get to the top 5.

Who will be going into film and television after Big Brother?

Speaking of Trikytee, we all know the Housemate is passionate bout filmmaking. He opened up to Big Brother that when his time comes to leave, he would definitely pursue his field career as the mad behind the camera. He mentioned that he would want to make movies and television series but also that he wants to focus on putting gout more of his music which is an eclectic mix of Afrobeats, soul and RnB.

Erica would definitely want to pursue her acting career and said that once she leaves the House- kicking and screaming- she would start reaching out to producers that she knows. The young actress wants to be big in Nigeria and act in South Africa and England too.

Based on the performances for this week’s Task, we believe that Housemates who want to pursue a career in acting, we’ll definitely make it.

Who are the business Housemates?

Though Nengi doesn’t like Sundays because of the anxiety associated with it, she was able to answer Biggies question and say she would focus on making her business a success. Similarly, Prince wants to make his business boom, but he went into a little more detail. The Housemate told us that as soon as his time comes, he will be launching a clothing line in addition to pursuing an acting career. Prince reiterated that he wanted to put his talent and potential to good use. Eric was not as nervous today. He told biggie that he has a few business interests but also wants to put some time and energy into his foundation, so that he can make some change in communities.

Kaisha would definitely go back to her online skincare business. Wathoni plans to keep her business online but also to open up a physical store where she will sell fashion accessories. Tolanibaj toldBiggie this evening that she would go back to work on her agency and get herself some office space as she is still working from home. After that, she plans to go into food production and explore packaging snacks and then explore real estate further into the future.

Who will be making us dance?

As we all know, Laycon has been talking about his music since he came into the House. The artist told Biggie that he was not yet ready to leave the House because he did not feel like he had garnered enough traction and fans for his project so far. He also said he wants to focus on himself and his music while in the House. If he were voted out tonight though, his music would be his main agenda. The second person to talk about music was our songbird Vee who would also definitely seriously pursue a career in singing.

The Housemates have already given a taste of their voices so far in the House, which is great practice for when they eventually come out.

Who is taking a holiday?

Kiddwaya said the first thing he would do is take a break and go to England to see his mom. Thereafter, he would find his away back to doing what he loves, which is helping people and plugging them with solutions that will help them, and then, of course, he is going back to the gym.

Neo also said he would be taking some time to himself while he figures out his next move. He told Biggie that thereafter, he wanted to open himself up to make himself a better person.

It seems centering is also very important for those coming out of the House too.

What of those with responsibilities?

Lucy opened up to Biggie about what she has going on in her mind. Though she has spoken about needing to get a house a few times today, she also told us that she would want to get her mom a car and build a house in her village. She also told Biggie that she would also like to relocate to Canada at some point.

Have we achieved what we wanted to achieve in the House?

Brighto and Tochi in their separate interviews both told Biggie that they had not yet achieved what they wanted to achieve in the House. Brighto mentioned that though he learns new things every day, he has not been here long enough. Tochi said he would have to get back to reality as best he could to get himself back on track.

Though tonight will be difficult, we definitely still have more action over the next few weeks together, and more getting to know each other to do. 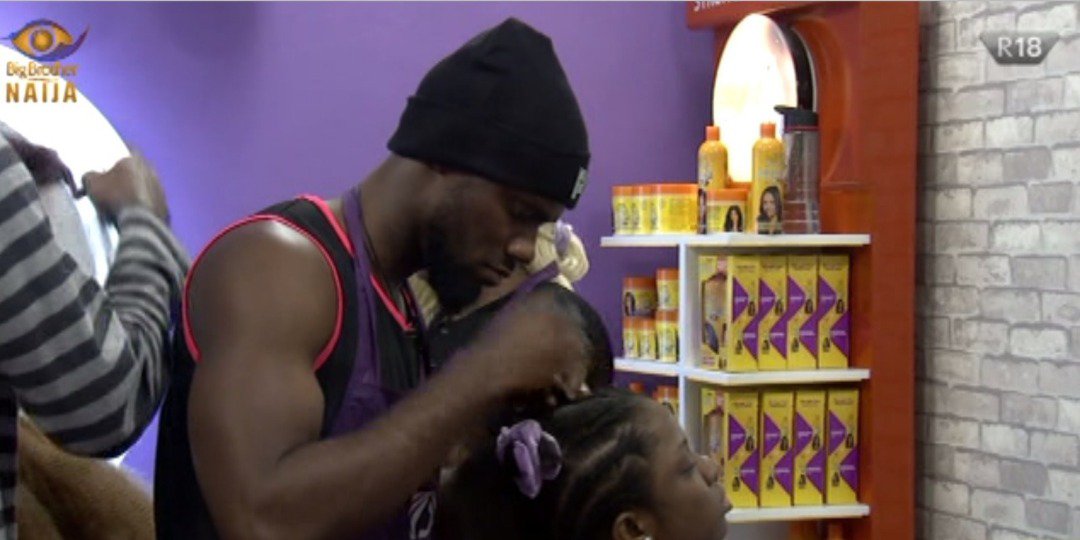 We are used to the Housemates getting their hair did weekly now, let’s take a look at the hair salon as it stands today.

Prince hows his skills as his nimble fingers keep the ladies and gents looking fresh.

The Housemates wakeup and catch up about the blur that was last night.

Kiddwaya puts Erica to bed while Laycon watches over, making sure that she does not do anything she will regret.

Laycon is worried that Erica will do something that she will regret, Praise tells Laycon to stop being Captain America and let Kiddwaya take care of her.