Home News “Banks were created to lend money out” – Lady who earns 10...

Embattled lady narrates the struggle with certain abuses faced in her marriage regarding her income and the struggling finance of her husband. 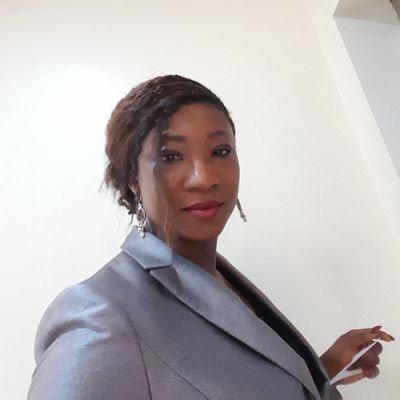 According to a Twitter user identified as @naikaidex narrated that the warnings received before settling for marriage with a man who earns lesser than she does finally came to life.

“I was young and free. Just before clocking 30 and dating this guy I thought the world of. I earned like 5-10 times as much as he did. He wanted us to be married. It felt great and right only that some older people said No. Reason? I earned way higher.
It made no sense at the time. What did earning capacity have to do with love. Dad said you are even more ambitious and driven with more at your disposal. Don’t do it!. I thought it was just cheap talk.

I stuck to my guns. It was going to be him or nothing else. Love was enough. It didn’t take 6 months before all they said came to life before my eyes. He wanted me to give money for his projects. He wanted loans. I wasn’t willing to do so and it became war.
Verbal and emotional abuse ensued. He cursed me to no end. I was acting too big or thought I was. I wasn’t a supportive lover etc. It went on until I couldn’t take it anymore. Then it got worse. How dare I walk away from the relationship and his love?

The emotional blackmail and insults. It took a while to get over such a person and all because I wanted him to double his own career goals and steps rather than live off me.
Over the years after, I learnt a lesson. Money is the no 1 reason for divorces and who brings in more changes the dynamics of relationships. If a woman does, this has to be discussed headlong and not assume the relationship will be like any or every other.

It won’t be like every other relationship and it’s even different if the woman starts to earn more in a marriage than before marriage. The male ego is very fragile and the freedom money gives a woman may come off as a threat even if unintended.

A gentleman must understand this and be prepared to navigate the relationship away from a basic traditional one where the man brings in the bacon. It is often dangerous when a woman marries down because the man’s once-hidden insecurities come up and fight .

That is when you see unabridged verbal, emotional and sometimes physical abuse. Then the guilt tripping, blackmail, manipulation etc. Only mature and secure men thrive well when a woman brings more into a relationship from the outset. This cuts across races.
A man expected to lead a family in a traditional sense must understand that his leadership isn’t only from money but support, care, direction and guidance he brings as long as he’s not lazy. He only earns less which isn’t a crime.

Barack Obama earned like 25% of what Michelle earned when he entered the presidential race but their marriage was fine although Mrs O stated in her book “Becoming” how she made it clear he had to step up when he worked as a grassroots community leader.
Good enough, he became a senator, earned better and was more physically and emotionally available at home. That helped their marriage but not without the therapy they sought at that stage. Most women want their men to step up in all areas esp once married.

It helps the woman respect him and view him as a leader for real. If your woman earns more, no problem but don’t be docile or abusive to her. That marks doomsday to your relationship. Step up. Take another course. Seek more openings. Help more domestically.
But don’t be stagnant neither ignore the power dynamics and shifts that come with a non- traditional, non-binary romantic relationship. Things will be different for you,” she wrote.

When asked about her unwillingness to financially support her husband, the lady restated the purpose of a bank.

“Lol Banks were created to lend money out. They even offer overdrafts,” she responded. 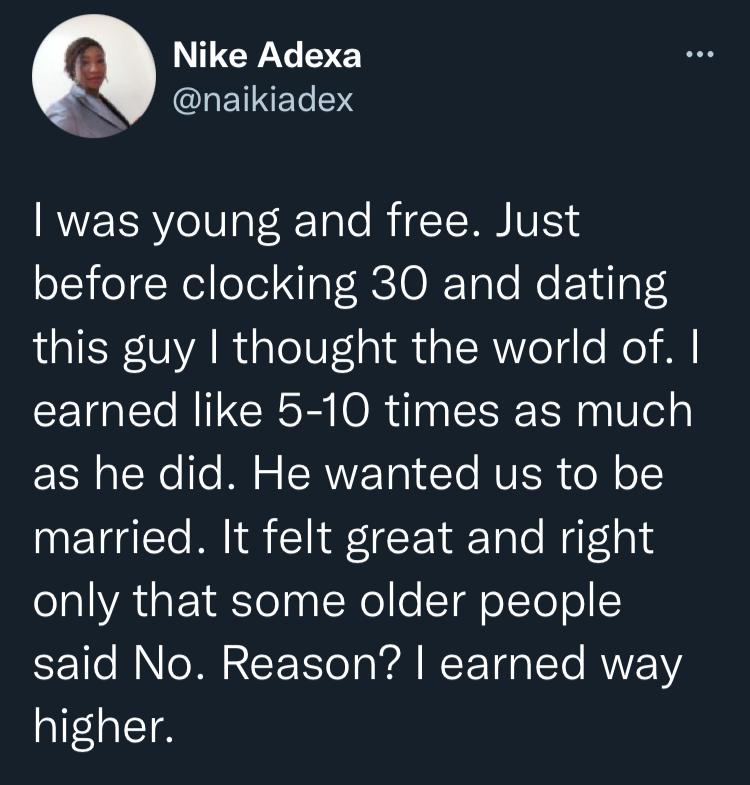 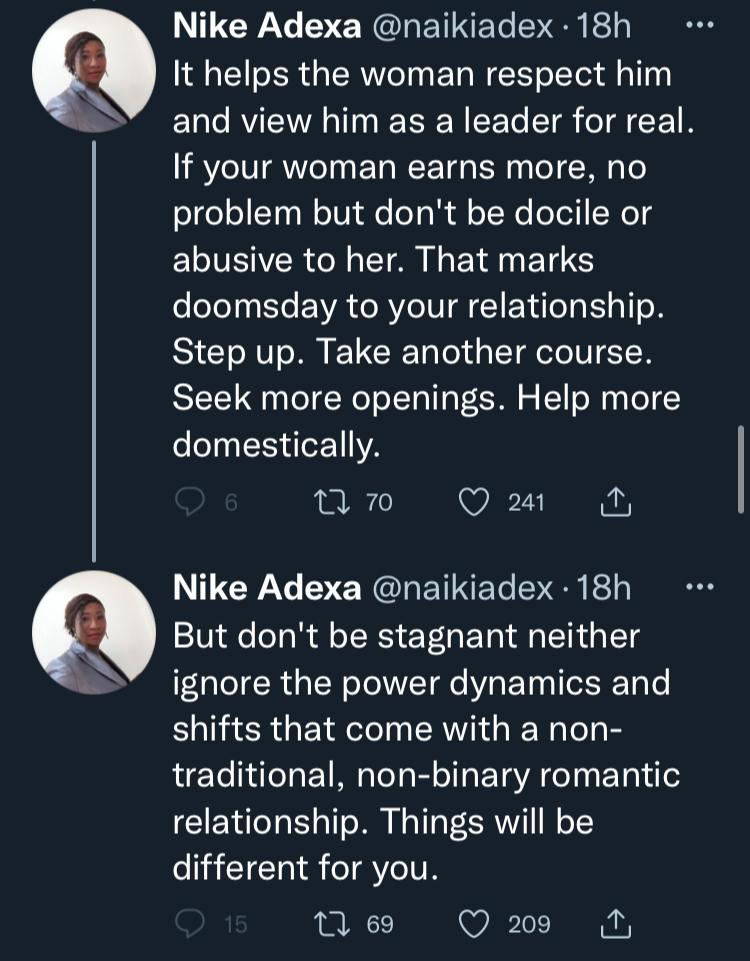 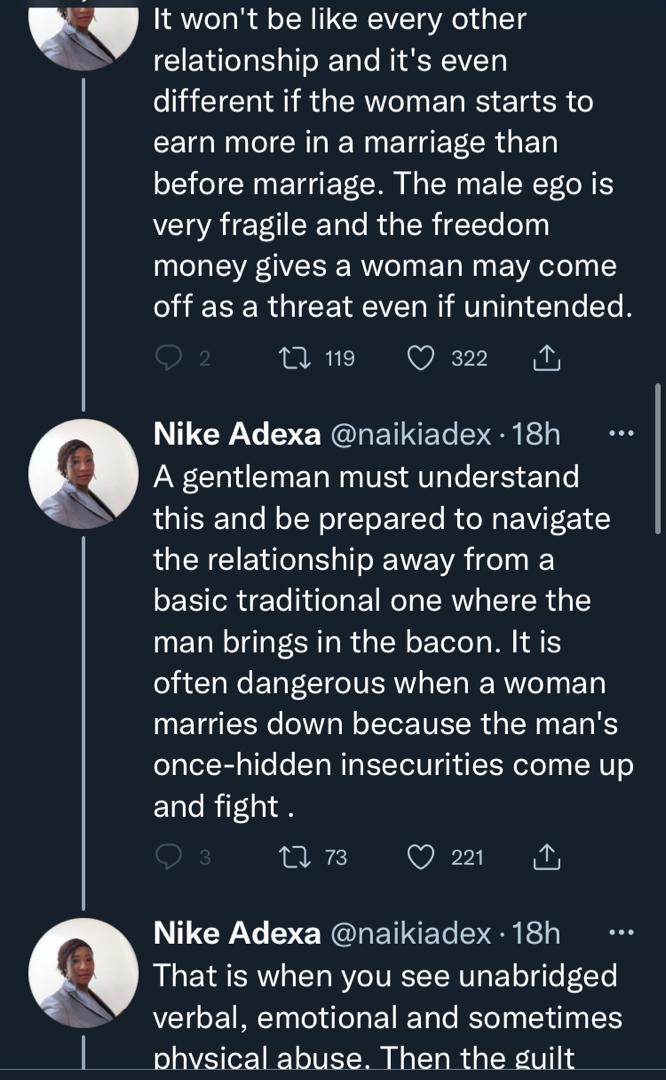 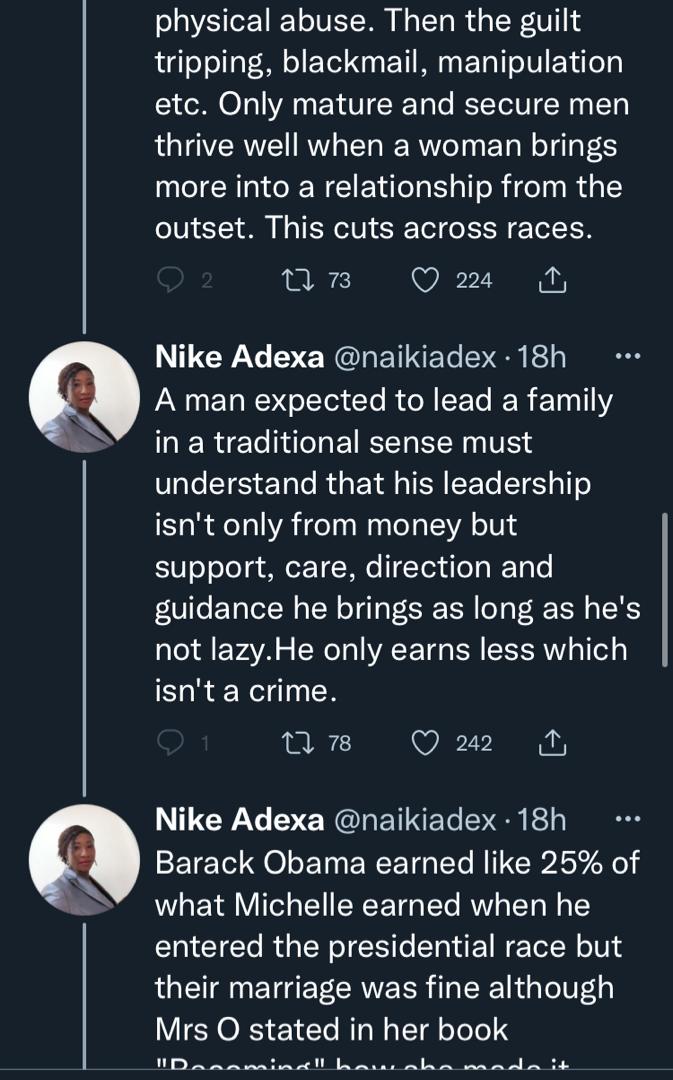 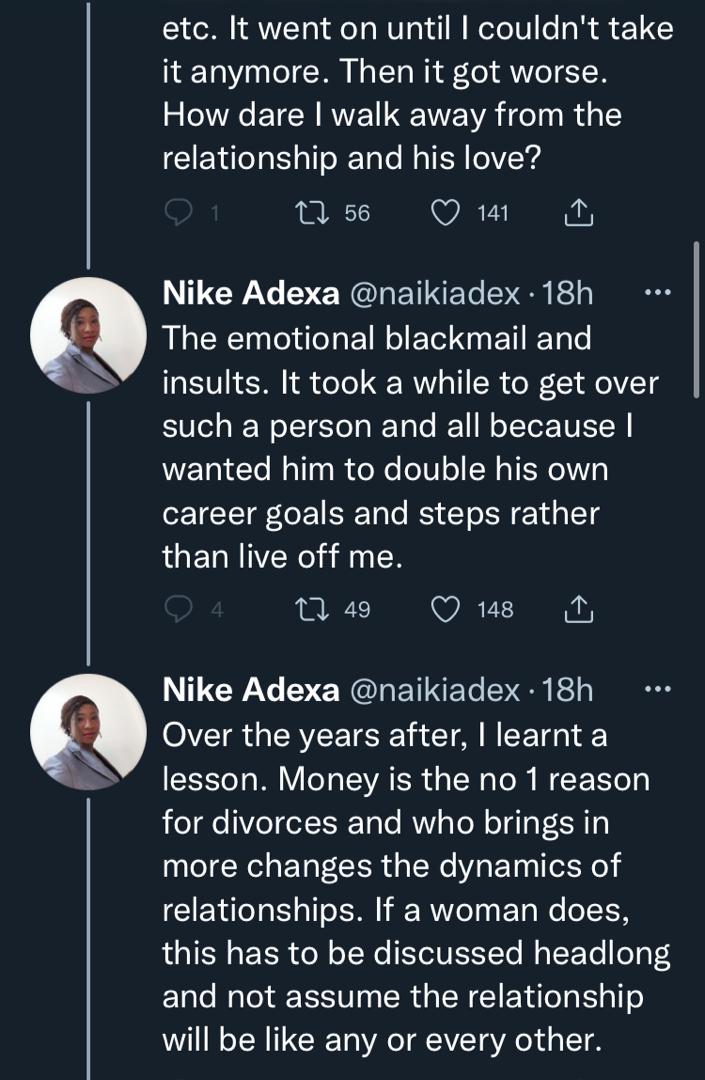 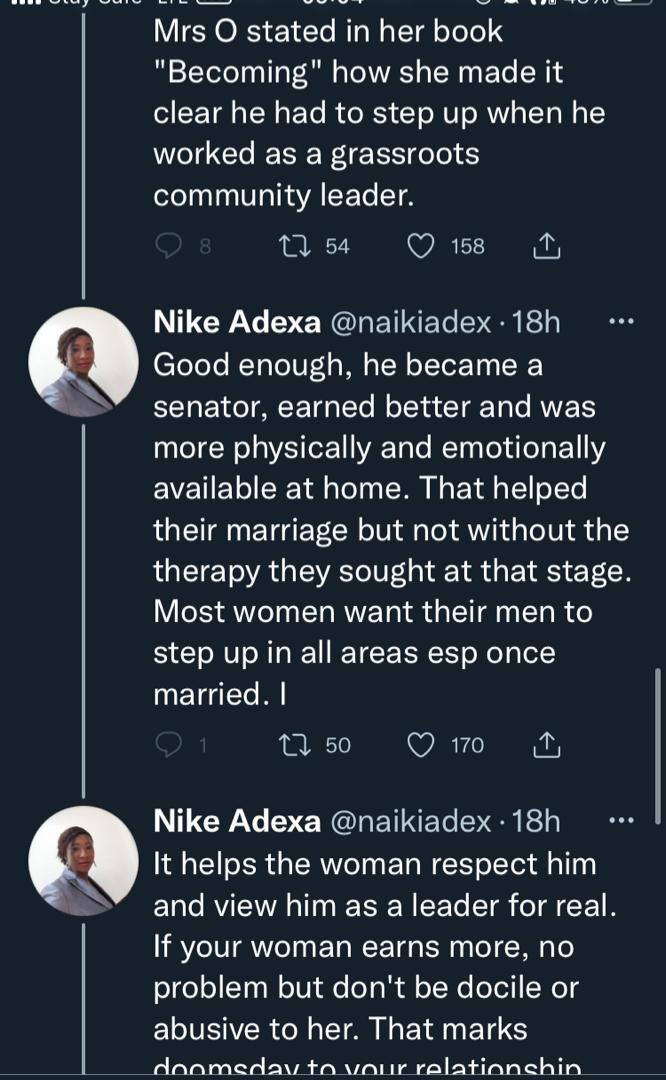 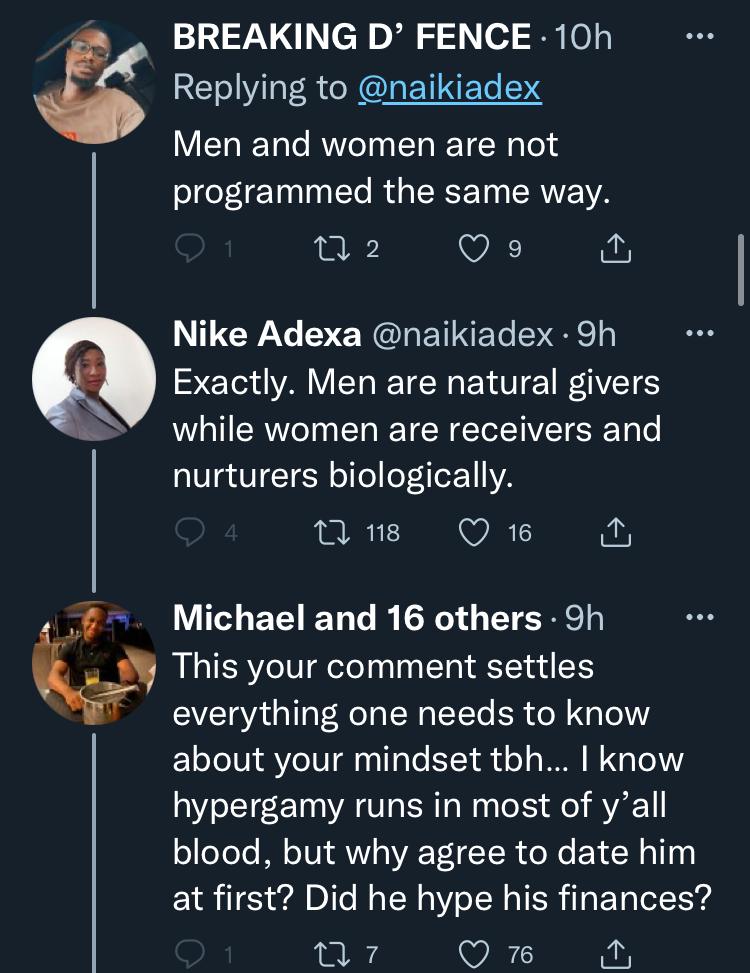 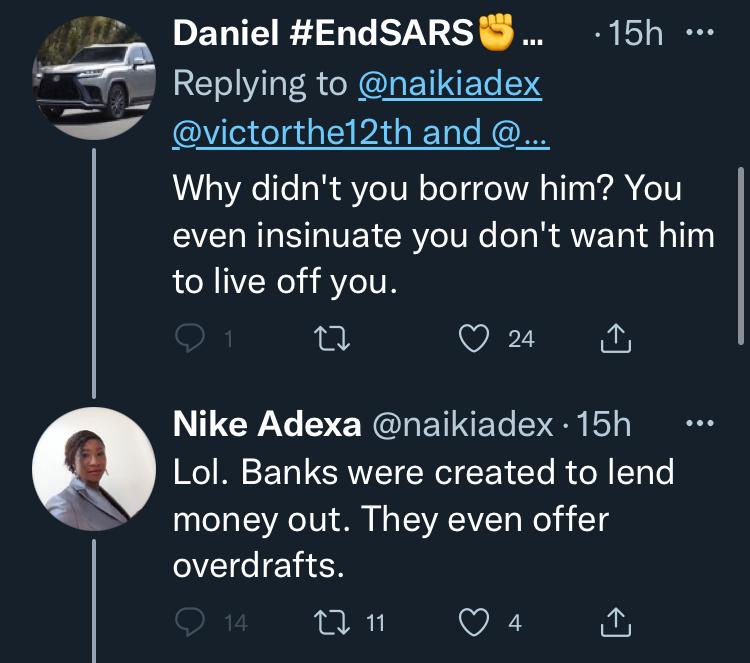