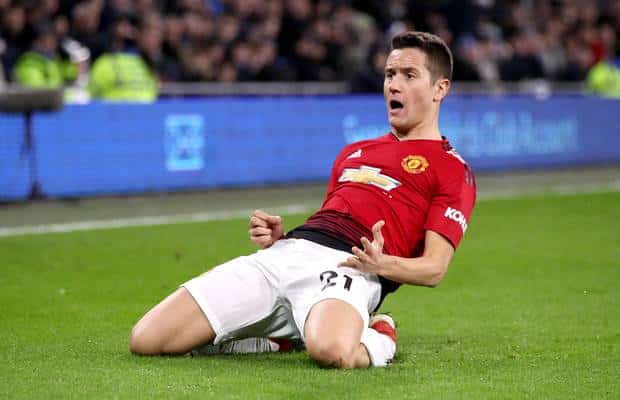 Ander Herrera has confirmed he will leave Manchester United when his contract expires this summer.

In a video posted on Twitter on Saturday morning, the Spaniard paid tribute to both the fans and the club for the ‘five amazing years’ he has spent at the Premier League giants.

Herrera is out of contract at Old Trafford this summer and looks to be edging closer to joining Paris Saint-Germain on a free transfer.

In the video posted on Manchester United’s Twitter account, Herrera said: ‘There is red in my heart. I knew it from the first time I played here and in the moment I started to wear it.

‘A club with thousands of fans that respect and remember all the players who give everything. I felt special when I heard my name chanted. I felt proud when the fans decided I was part of this incredible history.

‘Every time I represented this club in every game, in wins and losses, even when I couldn’t help from the grass, I understood what this club means.

‘I am going to remember each of the almost 200 matches that I have played with this jersey because playing for the greatest club in England has been a true honour.

‘Thanks for these five amazing years!’ 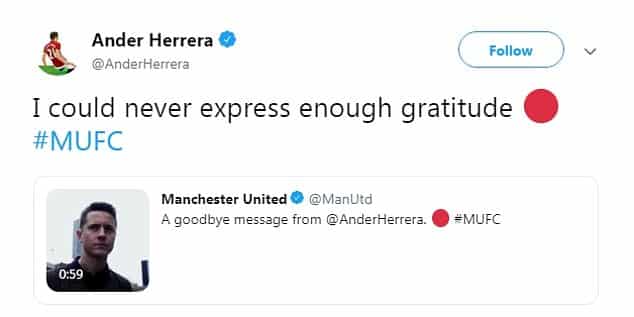 The video shows some of Herrera’s accomplishments during his time at the club, including when he won the Player of the Year award in 2016-17.

After joining from Athletic Bilbao in the summer of 2014, Herrera went on to win the FA Cup, League Cup and Europa League titles.

He remains an important player of Ole Gunnar Solskjaer’s squad and has made 28 appearances in all competitions this season, scoring three goals.

Herrera was arriving for training at Carrington on Saturday morning as United prepare for their final Premier League fixture of the season at home to Cardiff on Sunday.

He was driven to training by compatriot Juan Mata as the United stars prepare for the game against Neil Warnock’s side with a light session.

Talks between United and Herrera over a new deal broke down, prompting the midfielder to reportedly sign a three-year deal with the Ligue 1 champions.

Old Trafford boss Solskjaer is keen to move on more players in an attempt to freshen up a squad that missed out on the top four this season and end their campaign at home to relegated Cardiff on Sunday.

Herrera’s chances of remaining in the north west were scuppered by wages demands of almost £200,000 a week, considered unrealistic by chief executive Ed Woodward.