They were so in love with each other!
In fact, nobody envisaged that there would be a separation, not to talk of a divorce between Nollywood’s actress, Dakore Egbuson-Akande, and her husband. 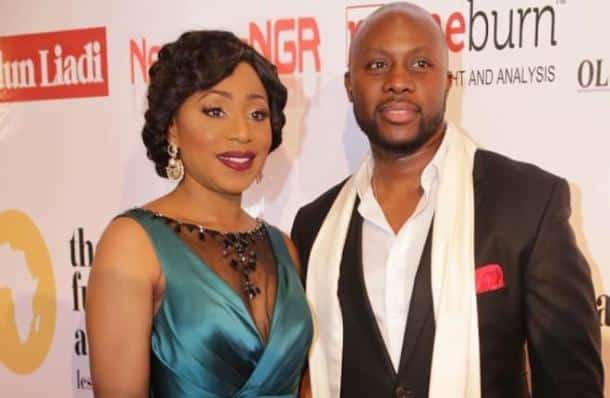 But like some celebrity marriages, Dakore and Olumide Akande are no more. Just like a pack of badly stacked cards, the nine-year-old wedding crumbled and the centre cannot hold.

Signs that the wedlock was troubled surfaced online when the actress posted a photo where she wore bikini! Prior to that, she was sighted at the One African Music Fest in Dubai with her brother, Timini.

“The marriage had problems a few years back but the couple tried to make things work out. Many factors were responsible but Dakore became tired of not having enough money to throw around. Her husband, Olumide, who is one of a son of billionaire businessman, Harry Akande, is broke—the money isn’t flowing like when they met, courted and married. Olu lives off his dad and the economy isn’t as buoyant. Even Harry Akande is allegedly not as rich as he was,” reliable sources told Kemi Ashefon.

“Olumide sacrificed everything for Dakore. Initially, when he made his intention known to family members that he wanted to marry the actress, hell was loose! No member of his family stood by him. To them, Olu could have gotten a good girl instead of an actress, who is tagged wayward and a gold-digger. He ignored all pleadings and advice. The handsome dude went for Dakore and they were married in 2011. They have two girls as products of the union,” source revealed.

Moreover, the quest for a third child must have allegedly put pressure on the actress who quit the movies long before she married Akande and after their two kids, they relocated to the United States of America. Well, Dakore’s mother-in-law wasn’t pleased with their lifestyle and wanted them in Nigeria where the couple can work towards giving her a grandson!

Meanwhile, Dakore had maintained that she was done with child-bearing. As a matter of fact, it was due to the imbroglio in their marriage that pushed her into acting again.

Not a few fans would be worried at this development because Dakore did all she could to keep her marriage intact—at least on social media. Not known to celebrate her wedding anniversaries on social media unlike some actresses, she revealed that she wanted a ‘private marriage and not one to be displayed on social media.’

In an interview two years ago, Dakore disclosed that, “My mother always say, ‘cover your yam and how you’re eating it.’ Like on his birthday, I just do maybe some posts on Instagram but we like to celebrate anniversaries in-house with the kids. We’ve been together for 11 years but married for seven years.”

Already, Dakore has moved out of her marriage and she is allegedly dating a Nigerian guy who is into entertainment and organizes big shows in Africa and other continents. Who knows the couple can still come back again.